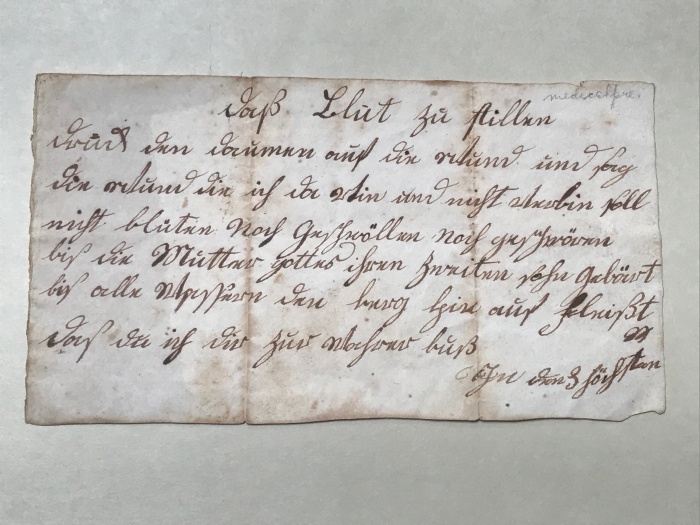 When we think about Halloween today, witches are one of the iconic figures of the holiday. Part of that image is the boiling cauldron, where the witch makes preparations for her spells and conjures up many of her evil potions. While the image of the witch is often viewed as frightening, real-life folk medicine has a long history in Berks County.

Often called “Pow-Wow,” this practice can resemble our modern conceptions of witchcraft. What if you lived in Berks County or another Pennsylvania Dutch area and you accidentally cut yourself? A document in the Berks History Center collection, and written in Pennsylvania Dutch, offers an answer. It reads:  “press the thumb on the wound and say that I should not die and the wound should not bleed, nor swell, nor fester until the mother of God bears her second son, until all the water flows up the mountain.” With this little “spell,” and a bit of pressure on the wound, the bleeding was supposed to stop. The BHC Library contains other documents on Pennsylvania Dutch folk medicine and folk religion.

Written by guest blogger, Sean Anderson as part of a project funded by the National Endowment for Humanities entitled: Metadata, Marketing, and a Local Archive: Creating Popular Interest from Archival Sources at the Berks History Center Research Library.

2 thoughts on “A Cure for a Cut: PA Dutch Folk Medicine”