Skip to content
HomeAll In: Life in a Time of War

During his popular Sunday lectures on the war conditions in France, Jere Edwards, General Secretary of the Y.M.C.A. of Reading, gave a presentation on “Womanhood and the War – Her Bravery and Sacrifice” which presented women capable of more than just the delicate things in life, but qualified to take her place in any department of activity, even to the extent of engaging in a world war. This report in the Reading Times gave a vivid description of the role women played in Europe and how their involvement was both encouraged and required in the allied efforts abroad.

The nurses of the Red Cross were the first to answer the call, participating long before the United States became involved in the conflict. Initially, they contributed as part of a humanitarian effort, which placed their services wherever they were needed. Once the United States entered the war, the Red Cross immediately served the United States. Those who served in Europe experienced the dangers of the war and risked their lives providing medical care on the front lines. At home, a service flag was unfurled at the Reading Hospital Alumni Association for the women who were doing their part for the war effort overseas.

As young men answered the call to defend their country, women stepped in to fill a much-needed void of male laborers in the workplace. It was not uncommon during WWI to see women employed in the mill at Carpenter Steel, a plant that was vital to war production. The women of Berks also took classes for mechanical drawing at the Boys High School and filled positions that they would not usually be offered, such as clerical, sales and railroad work. The Pennsylvania Railroad published women-only advertisements to hire women for work around the stations and tracks.

As the war continued in Europe, the traditional roles played by the citizens of Reading and Berks County were challenged. While many women volunteered for the Red Cross or the Y.W.C.A., others stepped in and fill the void in the workplace. Money needed to be raised for the war effort as well, and an enthusiastic group led an aggressive campaign to raise funds. By March 1918, everybody had a hand in helping the United States beat the Kaiser: soldiers fought overseas while citizens supported them at home.

The local stories from Reading and Berks County are a never-ending parade of patriotism in the form of a willingness to serve, an abundance of unwavering patriotism and an endless stream of donations in the form of Liberty Loans, War Saving Stamps, and Red Cross Drives. Each one of these drives were carefully planned and executed with precision. The Third Liberty Loan Drive kicked off in March 1918 with the goal of earning $1,000,000 in local subscriptions. The drive began by training 35 Boy Scouts from the Y.M.C.A. in military drills. Robert L. Leslie of the League Island Navy Yard led the instruction every Thursday night in the Y.M.C.A. gymnasium. The drills served as motivation for the boys, who were responsible for carrying out The Liberty Loan Drive. The Scouts went door-to-door, soliciting funds for the loan drive. Locally, the Boy Scouts had a force of 1,200 scouts ready to take to the streets in the name of liberty.

The drive began on April 6, 1918 and was kicked off with a rally at the Rajah Theatre on March 28th. The theatre was packed to capacity with a lively crowd, eager to hear the speeches promoting the Liberty Loan Drive. Sergeant Lawton Dixon, a Canadian, told gripping stories about the battles of France, such as how he lost his leg and his brother while fighting on the battlefield. This wasn’t the only loan promotion going on that day in Reading. A group of women gathered at the Weiser and Douglass school building to listen to Food Administrator Davies talk about Thrift Stamps. The meeting highlighted the fact that liberty came at a price and everyone had to do her part to ensure that liberty was secure. 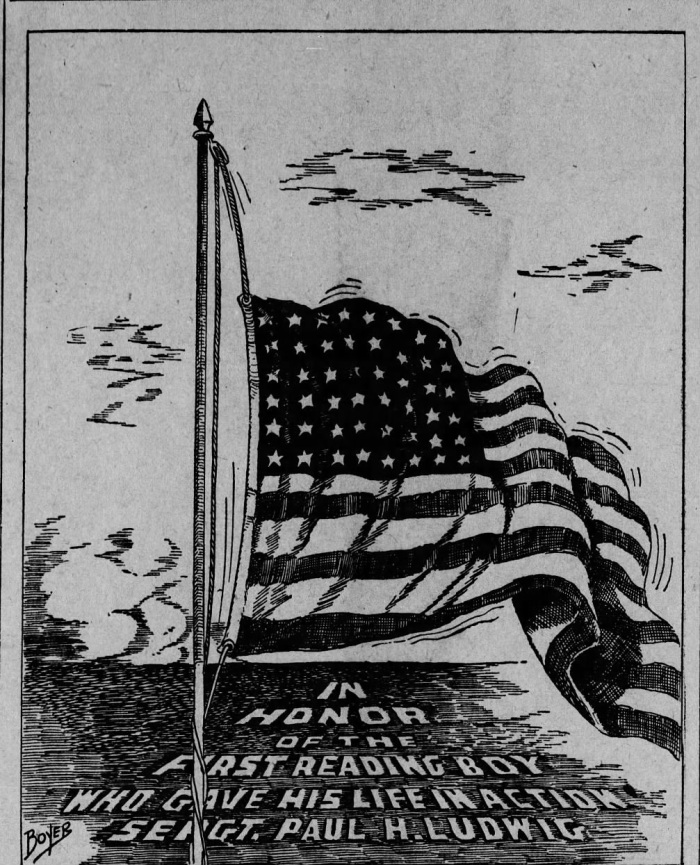 Just as the Liberty Loan Drive was gaining steam, Reading received devastating news about one of its soldiers. On March 14, 1918, the newspapers reported that Paul Ludwig from Company I, Rainbow Division had been killed in battle overseas. At the time, details about the locations of particular regiments were never revealed in the paper – until news reached home of a soldier’s death. Once the news about Ludwig had been published, every family who had a son in the Rainbow Division knew where their child was overseas. The following day, the news reported another loss: William F. Gehring of Company I, Rainbow Division. Ludwig died while fighting on the front lines. His death meant that every young man in who served with Ludwig faced the same dangers. For his sacrifice, Paul Ludwig was awarded the Croix de Guerre from France for his heroism in battle.

As the residents of Reading and Berks grappled with the loss of their own, they also prepared for something that they had never experienced. In an effort to conserve fuel that produced electric power, the United States followed in the footsteps of other countries by enacting Daylight Savings Time on March 19, 1918. The clocks were scheduled to move forward on March 31, 1918, just in time for Easter. The law proved to be so unpopular it was repealed in 1919. The second introduction of Daylight Savings Time, or War Time, was introduced by Franklin Roosevelt in 1942. 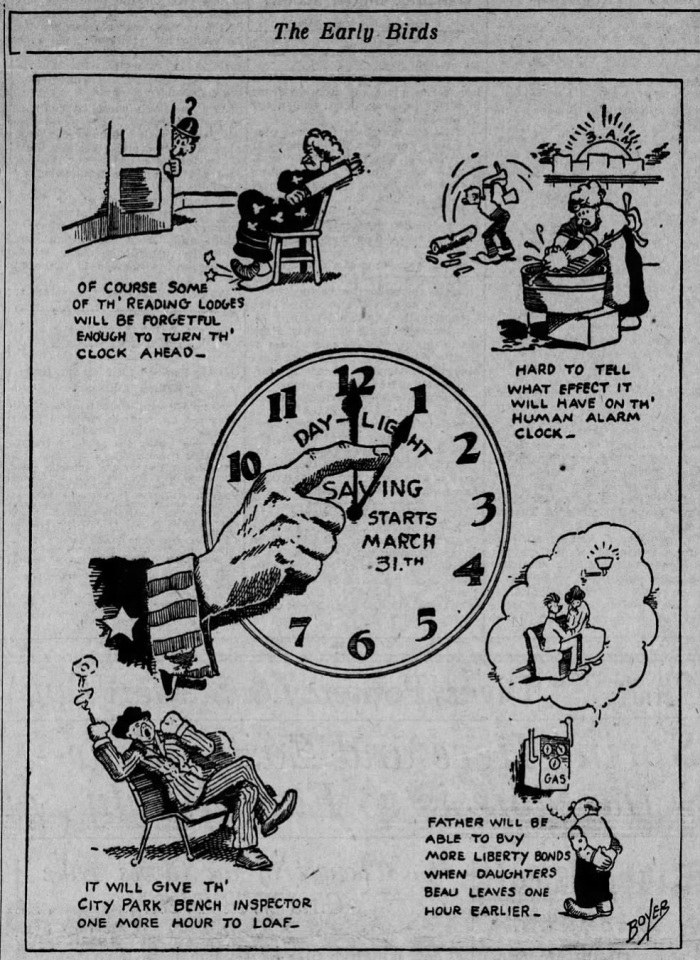