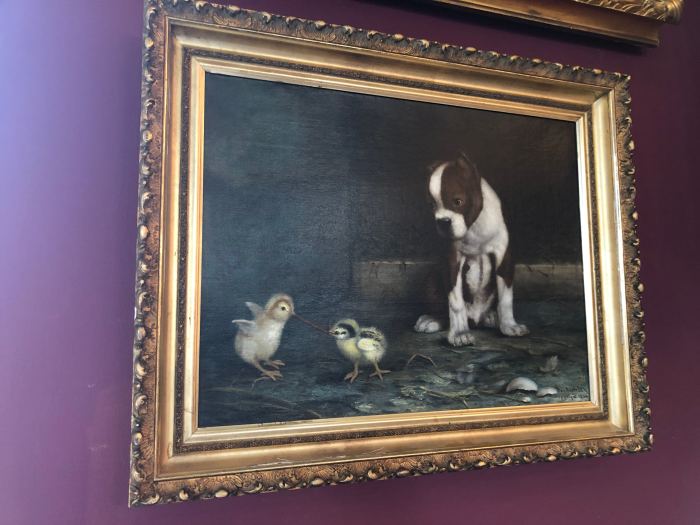 The Berks History Center (BHC) is pleased to announce a new acquisition, “Puppy Watching Chicks with Worm,” oil on canvas by Ben Austrian.

The acquisition was made possible with a gift from the Spinnaker Foundation, which focuses on the arts, athletics, education and health with an emphasis on educating children, encouraging philanthropic activities and improving the local community. Most notably, the Spinnaker Foundation has helped to promote the preservation and collecting of Berks County art by Berks County artists.

With the support of the Spinnaker Foundation, “Puppy Watching Chicks with Worm” was purchased from Greshville Antiques in December, 2018 and is now on display in the BHC museum. The 15”x20” gold leaf framed painting (copyright 1906) depicts a brown and white puppy watching two chicks fight over a worm.

Ben Austrian was an American painter best known for his realistic portrayals of farmyard life. Much of his subject matter focused on hens and their chicks, cats, dogs, horses, and game. Born on November 22, 1870 in Reading, PA, Austrian was largely self-taught. His work was influenced by other well-known Berks County artists including Federick A. Spang.  Austrian is best known as the painter of the famous Bon Ami chicks.

With this new addition, the BHC has a total of nine Ben Austrian paintings its collections. However, the subject matter is quite varied. Other Austrian works in the BHC collection include: “Still Life,” “Trees, Grass & Meadow,” a portrait of “John Misler,” “The Stand Off Terrier with Chick,” “Chicks with Basket,’ “Rooster & Hens,” and two “Hanging Game” paintings.

“Puppy Watching Chicks with Worm” is a particularly charming addition to the BHC’s collections of Ben Austrian’s work and epitomizes the subject matter for which this Berks County artist is famous. This painting, along with a number of Austrians, are now on display in the BHC Museum, open Tuesday-Friday, 10AM-3PM, and Saturday 9AM-3PM.