This year at the Berks History Center, we are celebrating foodways, which culminates with our annual Berks History Conference on April 21, 2018 featuring four food and drink historians. I describe my culinary expertise as good PA Dutch cooking, from potato filling to pig stomach, chicken pot pie with homemade noodles and “millich flitche” (milk pie). If you think about family I am sure it includes a good home cooked meal.

I have the greatest memories of making faschnachts every year since I can remember with my grandmother Carrie Kercher, fondly known to all as Gummy (because she always had a pack of Juicy Fruit gum on her). Making faschnachts using my great-grandmother’s recipe required two days so I always spent the weekend at my grandparent’s house. One year I decided I wanted to make the perfect faschnachts and we used a cup to make circular doughnuts; That is the year my grandfather ate the fewest because he said they didn’t taste as good without corners. Another year we played canasta into the early hours of Sunday, and my grandmother decided it was “time to make the doughnuts!” So at 2 in the morning we started making the doughnuts finishing around sun rise. I think that was the year we drank homemade dandelion wine, too! Every year we counted how many faschnachts we got from our one batch, usually somewhere between 10 and 12 dozen, all divided so that everyone got to take some home to eat. And for those of you who have not eaten a true faschnacht (which is one not bought in the grocery store) there is nothing like a warm faschnacht right out of the fryer rolled in granulated sugar. 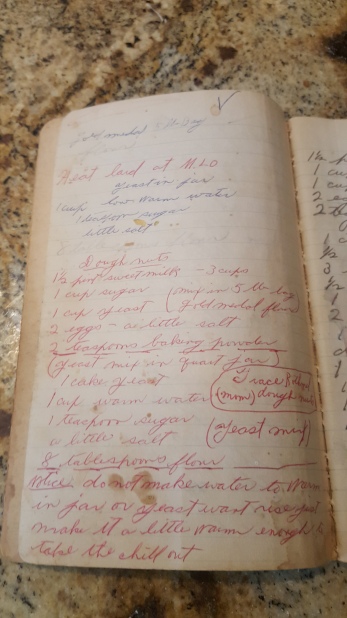 This is the 15th year of not having my grandmother telling me what to do and I sure do miss her because I usually screw something up! Every year it is a different mistake such as the yeast was bad, or I used the wrong flour, the potato water was too warm, the wood stove too hot or not hot enough over night, etc. Still I have new memories of making them with my three children. Justin only eats the dough raw, Becca has never really liked eating them and Devon, well, LOVES faschnachts but he likes his with confectionary sugar.

This year I have the great pleasure of being the premiere baker for the first ever Berks History Center faschnacht tasting party being held Tuesday, February 13, from noon until 3 pm. I’ll be making them this weekend so unfortunately they won’t be warm out of the fryer. Hope to see you then!