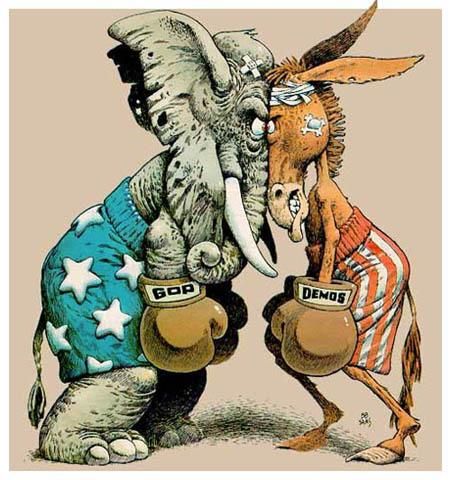 Election-related disagreement is certainly not a new phenomenon.  In fact one of the nation’s most bitter disagreements occurred during and after the contentious election season of 1876, a contest which pitted Democrat Samuel Tilden against Republican Rutherford B. Hayes. While Tilden won a majority of the election’s popular vote, irregularities and disagreements in multiple states left neither candidate with a clear majority of electoral votes.

To settle the matter, congress passed a special bill to establish an Electoral Commission that would review disputed vote counts in several states and award 20 disputed electoral votes as they saw fit.  The 15-member commission was comprised of five senators, five representatives and five members of the Supreme Court.  Among the members was Supreme Court Justice William Strong (1808-1895) of Reading, Pennsylvania, serving in what was likely the most significant role of his distinguished career as a lawyer, U.S. Representative and Supreme Court Justice.

The commission was comprised of 8 Republicans and 7 Democrats, and it might come as little surprise that for every state reviewed, the Republican candidate Hayes won by an 8-7 vote.  When the commission’s task was complete, they determined that Hayes had rightfully won the election with 185 electoral votes to Tilden’s 184 votes.  The Commission’s decision was not fully embraced, and in March 3, just two days prior to the inauguration, the House of Representatives passed a resolution declaring their opinion that Tilden was the rightful President of the United States

This was the era of Reconstruction and federal troops were still occupying states which had aligned with the Confederacy. A consequence of Hayes’ victory was an informal deal which entailed the Republicans withdrawing these troops from the south, effectively ending  Reconstruction.  Unfortunately, this opened the door for the creation of Jim Crow Laws and the disenfranchisement of many African American voters. 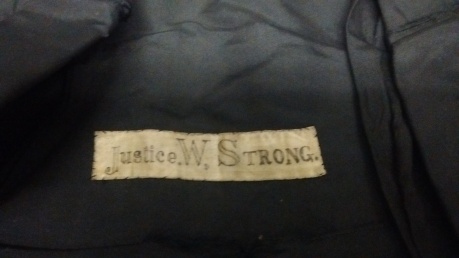 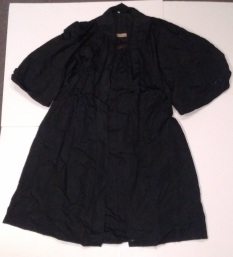 During our inventory of the Berks History Center textile collection, we discovered the judicial robe of Election-Commission member William Strong.  Strong was born in Sommers, Connecticut, he studied at Yale Law School and in his later years he resided in Washington D.C.  However, he was considered one of Reading’s native sons, having practiced law here from 1832 to 1857, and serving the region in the U.S. House of Representatives from 1847 to 1851.  It is one of several items in our collection that belonged to Justice Strong.

As we continue to inventory our museum collections, we are reminded that not all of our history is easy or enjoyable to remember. Some items, like Justice Stong’s judicial robe, tells us part of our American story, from our unique Berks County perspective, of a divided and uncertain sociopolitical climate. Regardless of an artifact’s political context or sometimes controversial subject matter, Berks History Center remains committed to its 148 year tradition of collecting and preserving our shared local history.

Luke Batdorf was soon to to learn that his election to the position of Justice of the Peace in Vinemont, was not all glory. There were more to the job than merely practicing with the new notary seal and remanding rail-riding bums who were unceremoniously kicked off of the Columbia branch of the Reading Railroad when the trains stopped at Vinemont station His next door neighbor “Potsy Flohr”, was a fancier of dogs, mostly mongrels, and mutts. The Flohr backyard was a veritable dog pound, self-supporting but unlicensed.

Villagers complained about the nocturnal concerts away off key; about the stench which rose from decaying meat scraps and bones; about the dangers to small children, the threat of rabies and hydrophobia, and yet, there was little that Luke could do about it. “Potsy” went about his business as a mender of umbrellas, traveling from town to town with an army of dogs following him wherever he went. Many of the newer acquisitions of the “Potsy” kennels were tied to leaches fastened to the master’s belt, yelping, barking, yapping, as the umbrella mender walked through the country side. “Potsy” paid his taxes; never broke any laws and always gave generously to all church campaigns even though he never attended services. Vinemont had no ordinances against the possession of dogs; “Potsy” was a good citizen – so that was all there was to it.

So reasoned the new justice of the peace.

“Potsy” ahd one other idiosyncrasy; he did not like to see small boys walk on stilts. For some reason such activities always annoyed him and he rebuked the boys in vituperative language, especially when they attempted to walk on the pavement in front of his house. For then, he claimed, the stilts dislodged the bricks of the pavement.

Because boys will be boys, the lads of Vinemont taunted the old umbrella mender by marching on stilts just to the edge of the Flohr pavement, bringing down upon themselves a torrent of reprimand. On one of these baiting ventures a small boy was injured by falling from his stilts when his laughter got the better of him. “Potsy” ire turned to solicitation and he did his best to relieve the boy’s pain, but soon a bevy of women came upon the scene, charging that “Potsy” was thrashing the helpless child.

Luke Batdorf had witnessed the whole scene from his bedroom window. Out into the crowd he charged while irate townspeople shouted:

Dogs to the rescue

Several weeks passed. Then the new justice of Vinemont found himself performing a very unpleasant duty. A suspected murdered had been apprehended near Blainsport and it was Luke’s duty to bring him to the Vinemont Station. It appeared that everyone was too busy to go with him and he faced the task alone.

The road was rugged and lonely. The prisoner chafed at the ropes which bound his hands as, doggedly he walked in front of his erstwhile captor who trudged along unarmed. Suddenly, in a shaded bend in the road the rogue turned upon his frail captor and by kicking and clawing soon overpowered the justice of the peace. Half consciously Batdorf held on to the trouser leg of his prisoner, felling his strength ebbing; it was only his resolution the name of duty which enabled him to hold on. When suddenly there came the eerie sounds:

Yip! Yi! Br-r Yip! Wuf! A dozen hounds, shepards, spaniels, mutts, and mongrels were pouncing upon the scoundrel who was trying frantically to get away. A few feet away was the Huns-Johnny, shouting “Sick em; Sick em.”

“Gosh, neighbor,” exclaimed Batdorf, “You were just in the nick of time.”

“Yep, Me and the dogs figured you might be coming along this way, so we came to help bring that rascal in.” 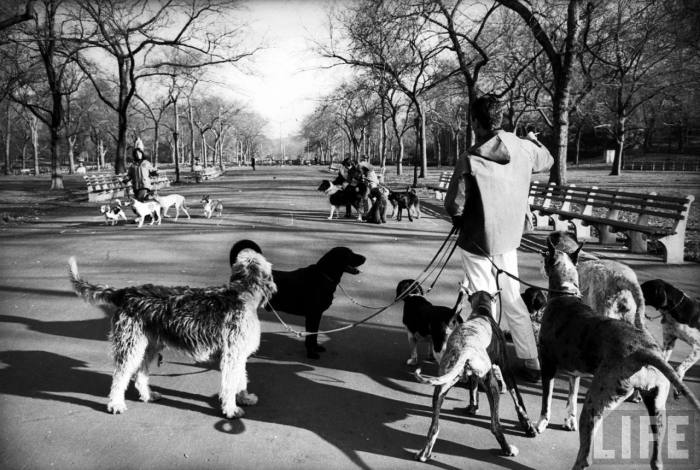 At various times in his checkered career Hugh Lindsay made his home in Reading. Certainly the life of an itinerant clown did not permit long residence in any one place but Lindsay honored Reading with his longest tenures. In 1835 he made the acquaintance of Samuel Perry of Bern Township, Berks County. Perry was a violist in the troupe of actors that worked in Miller’s Allentown Circus. (In 1859 Perry was a storekeeper in Bern Township). We cannot say whether it was the close friendship of these two that brought Lindsay to Reading, but in 1835 we find him operating the Eagle Hotel. There his son, Charles Franklin Lindsay, was born and there the clown suspended his antics for a time to settle down as a substantial citizen.

Actively he engaged in Berks politics. He made speeches advocating the establishment of the Common School Law which was then a keen issue. He came out in support for Henry A. Muhlenberg  for governorship in the three cornered race between Muhlenberg, Wolf, and Ritner. He was not opposed to Wolf except insofar as he felt that Wolf had had the office long enough. Ritner won.

It was 1835 while he was a hotelkeeper in Reading that the erstwhile comedian was made a captain of the militia in a regiment commanded by Col. John Frill. Read his description of battalion day. Remember it was in 1836.

“At one of our spring trainings, one of our members without the fear of his officers or shame of devil, allowed himself to be shot in the neck by a bowl of whiskey which caused great confusion among the ranks. Whereupon by my orders he was seized by 16 able-bodied soldier-like men and was placed in a hollow square and four men holding him on his feet; and by the whole command marched through the principal streets and alleys, music and flags flying, up to my headquarters and there by my orders placed in a bed on a bundle of straw in an empty cowstable and a glass of whisky administered to him. Before morning he had evaporated.

After the company being dismissed they gave 13 loud hurrahs for their gallant captain. They then boldly, thirstily, faced my bar, wet their whistles, paid down their clinck, and each man with a cigar in his mouth, retired to their respective homes, safe and sound.”

Such was the character of the young American republic more than a century ago.

In 1797 Schuykill County had not yet been created out of mother Berks. Consequently crimes committed in the sparsely settled areas north of the Blue Mountains were tried in Berks County courts. The trial and sentencing of Benjamin Bailey for the murder of a German peddler named Folhafer forms an interesting chapter in the early Berks legal history.

Jost Folhafer was a peddler who plied his trade between Reading and the Mahanoy Valley, usually following a road which led through Virginville to the top of the mountains in Albany township, passing near the old site of Fort Franklin and then continuing in a northerly direction to Mahanoy and Rigntown mountain. In August, 1797, the German peddler stopped for a night’s rest at the tavern owned by John Reich, in Mahanoy. Benjamin Bailey, a hunter, was a guest in the same hostelry that evening and both men set out on their journeys the next morning.

During the afternoon of that day Folhafer’s riderless horse returned to the hotel and foul play was suspected. Searchers found the body of the peddler and a hunt was instituted to locate Bailey. The peddler had been shot and his purse was stolen. Many years later most of the money was found hidden in the hollow of an old tree where the murderer had cached it after subtracting a small sum for his immediate needs. The murder occurred near present day Brandonville, Schuykill County.

The murderer was found and arrested. He was tried and convicted in the Court of Oyer and Terminer of Berks County at the November term in 1797. He was sentenced to be hung and the sentence was carried out in an open field at the foot of Mt. Penn.

In pronouncing sentences Judge Rush addressed the murderer as follows: “Weep I say over the blood of Folhafer, for if you go out of the world with his blood on your conscience it will torment you and wring your soul unceasing agonies and horror.”

On Folhafer’s tombstone on Ringtown Mountain appears the following inscription: “Let all posterity protect this spot and reverence this ancient landmark.”

Archival notes: 6,000 to 7,000 people attended the execution of Benjamin Bailey on January 6th, 1798. For perspective, it was about one quarter of the total population of the county at the time. For more details on this case two excellent sources are available online through google books. The source with the most in depth details comes from the Transactions of the Historical Society of Berks County.