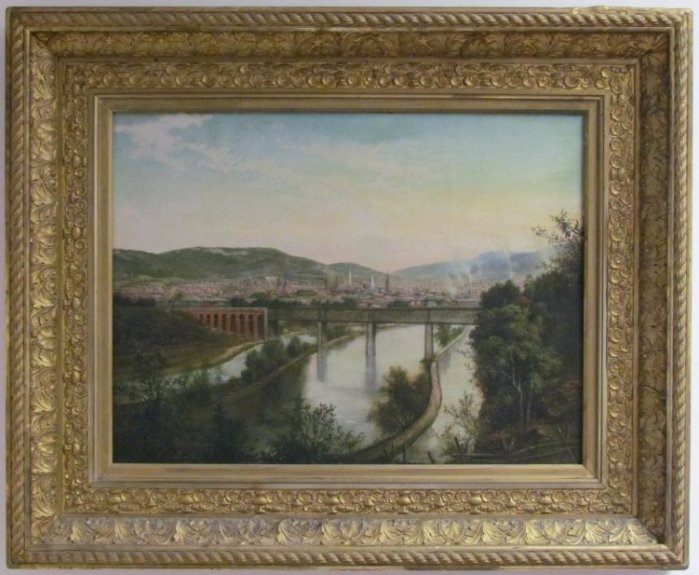 Reading and Berks County have a rich railroad history. This circa 1875 oil painting by John Heyl Raser (1824-1901) depicts the original Lebanon Valley Railroad bridge where it crossed the Schuylkill River and the Union Canal at Reading. Opening in 1858, the Lebanon Valley Railroad became a subsidiary of the Reading Railroad, and a lucrative route connecting Reading with Harrisburg. John Heyl Raser was a native of Alabama who moved to Reading in 1851 and became particularly well known for his landscape paintings. He exhibited his works at a variety of venues including the Pennsylvania Academy of Fine Arts.

Many residents of Reading will remember the towering figure of the one-time chief of police of this city, Mahlon Shaaber. He stood six feet, seven and one-half inches, a giant stature. Early in the trying days of the Civil War Shaaber joined the company of Zouaves officially known as Company B of the 93rd Regiment of Pennsylvania Volunteers. This company was recruited in October, 1861, from Reading, Bernville, and Womelsdorf and other sections of Berks County. Mahlon Shaaber was the tallest man in the entire regiment and won for himself the nick name, the “infant of the regiment.”

In January, 1862, the 93rd Pennsylvania Regiment passed in review along Pennsylvania Avenue of the nation’s capitol. Among those who reviewed the troops was Abraham Lincoln, the President of the United States. When the Reading Zouaves passed the reviewing stand Lincoln’s attention was attracted by the tall lanky private who towered high above his comrades. A signal from the President to the captain of the Zouaves led to the order to Shaaber to fall out of line and approach Lincoln.

“How tall are you?” asked Lincoln.

Then, as Shaaber related it years later, Lincoln introduced himself, “I am old Abe,” and then introduced Shaaber to Hannibal Hamlin, the vice president.

The three tall men stood side by side. The unusual picture made an impression upon Lincoln. Two other Pennsylvanians were invited to join the group and then the President made the following notes in a small black notebook:

After the interview Lincoln gave the soldier a pass permitting him to rejoin his regiment and inviting him to visit at the White House.

Several months later Shaaber and Sergeant Fritz of the Zouaves paid a call upon the President in the executive mansion. They were ushered into the Blue Room and there were greeted by the President. Lincoln invited his Berks County guests to dine with him. The young men lost courage and fumbled for excuses. According to Shaaber’s testimony he “preferred bean soup and hard tack better than a reception dinner.” In later years the Reading chief of police expressed regret that he had not accepted the President’s invitation to dine.

Archival Notes: For more information please refer to Norman Gasbarro’s blog, http://civilwar.gratzpa.org/2013/01/mahlon-shaaber-tallest-soldier-of-the-civil-war/  He does an excellent job of providing a more detailed account of Mahlon Shaaber.