Before the advent of the automobile a six-inch fall of snow was welcome for it meant travel by sleigh and that was a very pleasant change from bouncing over the rough roads in a buggy or wagon. Those who started to travel after the “patent roads” (patenta wega), tarvia, asphalt, concrete etc., were made, can not imagine the condition of the side roads before that time. Even the main roads, usually toll roads, called turnpikes, were not too good.

The macadam and dirt roads were not so bad during the summer and early fall, but a few heavy rains followed by freezing temperature changed them into a series of holes. It was an adventure to go any distance for the riding was rough and as for speed – one afternoon a man traveling in a buggy offered a lift to a chap walking toward town, but the offer was refused for the pedestrian said he was in a hurry as he wanted to catch the 3 o’clock trolley. There were a few places where the horse could trot but the time he made there was lost in the low places where the going was so tough that the poor animal had trouble keeping his feet.

All this changed when snow covered the ground for it closed all the holes and evened all the bumps and traveling by sleigh was very comfortable.

On the farm the sleighs were kept in the back of the shed, sometimes suspended from the ceiling to be out of the way, so before the implements were put away in the fall the sleighs were brought out and put in order. Some farm sleds (blugshidda or Black-shildaa) had the body permanently fastened to the runners, while others consisted only of the fram and runners and the farmer merely transferred a body from a wagon. The sleighs usually had a single set of runners, that is one runner on each side extending for the length of the frame with the tongue fixed that horses and sled turned as one. Some sleighs had a double set of runners (dubblete-shlidaa) with the set in the rear firmly fixed while the forward set turned with the horses like the front wheels of a wagon. These sleighs could be turned more readily than those with a single runners and did not upset as easily. They were mainly used by business firms for heavier loads could be carried on them.

Light sleds, or pleasure sleds, were commonly called cutters (Yaag-Shilda) and the earlier one’s were not very comfortable. They were light in weight and small in every way. The back of the sleigh was so low that it gave practically no support to the rider and every time time the horse changed pace and jerked the sled, the riders head and shoulders snapped back so that a long ride usually meant a stiff neck. Later the shape of the pleasure sleds was altered and the height of the back was increased which added much to the comfort. There was another form of pleasure sled which resembled the Russian sled. These were rather rare. The sled had a very high back extending well above the shoulders of the driver. The sides were raised and curved gracefully forward to end at the dash in a carved figure like the neck and head of a swan. Painted in flashy colors, usually red and yellow, they made quite a picture. A sled of this type in Womelsdorf bore the date 1801.

The heavy sleds (bob-sleds) used two horses and the pleasure sleds usually only one so it was necessary to “set over” the shafts on the latter so that the horse could follow one of the two tracks made by the bob-sled. The shafts could be set to either side but were usually set to the right in front of the driver. Being directly behind the horse the driver had to learn to dodge the lumps of snow thrown by the horse’s hooves as well as other things, and he soon found out that it was not wise to open his mouth  wide while the horse was running.

Following a heavy fall of snow the tracks made by the bob-sleds were quite deep and light sleds frequently upset. this was more annoying than dangerous for unless the horse started to kick or ran away, a tumble into the snow was all that happened. Many upsets occurred when two sleds tried to pass, for while regular “turn-outs” were made by clearing a space at the side of the road, two sleds usually met half way between them. Unless the snow had drifted so that the road had to opened by shoveling, not very much was done to improve the roadway. It seemed as though the supervisors hibernated like the bears for they were rarely seen on the roads from November to April.

With the exception of the members of certain religious sects and a few contrary individuals, every one used bells either on the horse or on the sled. In addition to the music they made they served to give warning of an on-coming sled at a curve in daytime and of approaching sleds at night.

They were mounted on straps (string of bells) which buckled around the horses-large bells for bob-sleds and small one’s for the cutters and the kind of sled could be told by the sounds of the bells. Some cutters had sets of bells graduated in size fastened to the shafts. These produced very harmonious tones which could be distinguished at great distance.

On a clear cold night with the bright stars overhead; warmly dressed, snuggled under heavy robes with a hot brick at your feet; the tinkling bells keeping time to the thudding of the horses hoofs —

“Oh what fun it was to ride

In a one-horse open sleigh.” 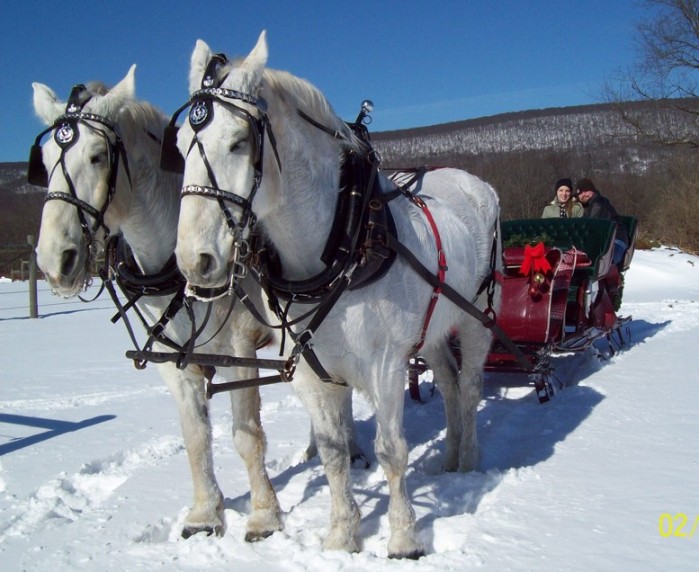 Valentine Moyer, teamster of the days of Braddock’s expedition toward Fort Duquense, was the first of the dynasty. Philip, his son, was an officer in the revolution and a wagon-master carrying supplies to Washington’s Army at Valley Forge. Daniel, the son of Philip, was the most famous of the four.

Great canvas-covered wagons, drawn by four jet-black Conestoga horses plied their way across the mountains between Philadelphia and Pittsburgh. Landis and Omwake in their “The Conestoga Six-Horse Bell Teams of Pennsylvania” are convinced that many of the early taverns named “Black Horse Inn” derived the name from Daniel Moyer’s powerful team of four blacks. It was custom in the early days of wagoning that whenever one teamster came to the rescue of another team that was stalled or mired the rescued teamster was obliged to surrender one or more of his hame bells to the rescuer. Daniel Moyer collected more such trophies than any other driver, hence the glory for his array of four black steeds.

Nevin Moyer, of Linglestown states that Daniel Moyer brought the first piano that reached Berks County to his home in a covered wagon. The plan called for instructing his son, Daniel Junior, in music and an instructor was engaged for that purpose. But young Daniel did not practice faithfully. Only on occasions when his father was at home could the young man be brought to touch the keys, and yet each time Daniel ‘(senior)’ arrived home his son was seated at the piano. The boy had heard the tinkle of the hame bells which announced his father’s approach. However it appears that the musical training of young Daniel Moyer was not wasted because it was he who held the post of bugler for the cavalry which escorted Lafayette during his visit to Lancaster in 1825. The escort was made up of a cavalcade of covered wagons.

From a local standpoint, the most remarkable fact about Daniel Moyer (senior) is a feat of herculean strength as recorded by Ann Hark in her book “Hex Marks the Spot”. The test of strength took place at Charming Forge in western Berks County. Moyer and a rival teamster were testing which of the two was the stronger.

The two men stood erect while pieces of pig iron were placed upon their backs until each man was weighed with over a half-ton of metal. Neither man broke under the terrific strain, but onlookers gave a resounding cheer when Daniel Moyer strode forward carrying his load on his back while the other man remained rooted to the spot.

The James L. Wilkins was a canal boat that slid its way along the Schuykill Canal from 1868 to 1873. It was owned by the firm of Jackson and Newkirk, Brooklyn, but its headquartes were in Reading and most of them men employed on it were Reading and Berks residents. Through the kind offices of Rober Salathe, of Reading, we have come into the account books kept by William Munshower, master of the James L. Wilkins.

Munshower lived in Reading. Many of the names of the men he employed are surnames frequently found in Berks, and even though we know nothing about them beyond the names are safe in assuming that some of them were Berks Countians. Among those mentioned are George Eckert, Lewis Yoder, Ephraim Trautman, James Simon, Frank Ruff, H. Mattis and S. Spotts. Now that we have established the local flavor we can proceed to relate some of the activities of the James L. Wilkins.

From March to November the canal boat plied between Schuykill Haven and Brooklyn, through the Schuykill, Delaware, and Raritan Canals carrying coal from Pennsylvania and returning laden with New Jersey clay for brick ovens in Manayunk and Reading.

A boatload of coal averaged 180 tons. The Freight costs of delivering a ton of coal from the mines to New Brunswick, N.J.  or Brooklyn, N.Y., varied from $1.90 a ton during the summer months rising to $2.25 in November as winter approached. Boatmen received 16 or 18 cents a ton for unloading at their destination. The toll costs on the Raritan Canal were approximately $40 one way, and on the Schuykill almost $50 one way. Subtracting the toll costs plus wages for the crew of three men and the provisions for mules and men it appears that canal boating was a profitable enterprise.

One of Munshower’s duties was to purchase supplies from the various canal-lock stores along his route. His factors, Jackson and Newkirk, reimbursed him for sums expended in providing food for his men and for the mules as well as for incidental pieces of equipment which he purchased from time to time. In studying the rations purchased, usually from D. Kline;s store, one is truck by the large place that the various condiments occupied in the diet of men in those days. It appears that they did their own cooking, and much of their own baking on board the boat.

A glance of the prices of the commodities of those days is interesting to those who wish to make comparisons with the present. Here are some of the items:

The James L. Wilkins was idle from November until March. During this period ice formed over the still waters of the canals and the cold weather made the boat untenable for man or beast. Munshower was not idle during this time. He spent his winter months helping the brick manufacturers convert clay he brought to them into red bricks.