This week, we are proud to share an essay authored by Corrie Crupi-Zana, the Vice President of the BHC Board of Trustees. Following the introduction of our History for Victory! campaign earlier this year, Corrie felt inspired to research and write an article about victory gardening – we are so touched that this campaign continues to inspire our own, as well as others in our community!

During turbulent times of war, strife, disease, and the Great Depression, our government encouraged people to become empowered and be self-sustaining.  In an effort to help reduce the pressure on the already low food supply chain, Victory Gardens were promoted with the slogan “Digging for Victory”.  In school, children were asked to volunteer to become part of the Victory Garden army and be “Soldiers of the Soil”.

In a 1919 pamphlet published by the National War Garden Commission, it pitched “War Gardens for Victory” stating that gardening was an American civic duty. During World War II, some 20 million victory gardens were planted in the United States. People started gardens in any space available such as on roof tops, fire escapes, windowsills, or backyards. Eleanor Roosevelt set an example by planting a garden on the front lawn of the White House. In 1943, it went as far as using Comic Books to depict cartoons of Superman, Batman and Robin working in their gardens.

Around Berks County, half our work force entered for the military services. The burden of feeding millions of starving people fell on the United States government. Our local government urged people to jump on this bandwagon and express their patriotism by planting gardens. The citizens of Reading were inspired and needed another way to supplement their food ration stamp allowance.  The intent was that these victory gardens would help boost their outlooks and create a sense of security by being rewarded with a productive abundance of home-grown fruits, vegetables, and herbs.  Many of Berks County’s department store fronts exhibited displays featuring garden tools and fruits and vegetables in their large show windows.

Gardens started to sprout up everywhere there was a small plot or vacant lot of land.  Reading had numerous gardens at many locations.  Permits were needed and issued from City Hall at 9th Washington Streets.  In the beginning, most of these gardens had a Safety Committee or a paid watchman.  The Reading Railroad allowed an empty lot to be tilled and farmed by their employees at the corner of 6th and Spring Streets. The Pottiger tract was at Church and Amity Streets and the Barbey’s allowed space at Third and Windsor Streets.  Other plots included were the nice garden areas formed around Hampden Boulevard at Marion streets and on Sternbergh land near the Sterling Mansion on Centre Avenue.  The East Reading side of town also had many patches.   Berks County Historian, George M. Meiser IX, recalls a large plot of six beautifully maintained gardens that spread from Baer Park on West Douglass Street all the way down to Clinton Street on the west side.  In Lower Alsace Township there was a large community allotment in a field at Cornell Street and one on Taft Avenue and one on Butter Lane in Exeter Township which are still tilled today. 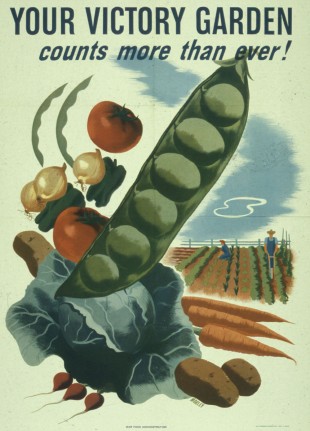 Some of the basic vegetables planted were tomatoes, carrots, beets, lettuce, peppers, radish, turnips, cabbage, cucumbers, spinach, onions, celery, and potatoes. Also popular were fruits such as strawberries, grapes, peaches, and apples. They grew lemon balm, mint, and lavender for tea.  A variety of herbs were easily grown including as rosemary, dill, oregano, parsley, thyme, and fennel.  Canning, jarring, freezing, drying, and pickling became quite the hobby and a tranquil challenge with tangible results.  Ideas from the old countries were used to stew down fruits and vegetables for sauces, jams, and marmalade. Cuttings from fresh herbs were put into an ice cube tray with water and frozen to later be able to pop some freshness into a stew or soup.

A resurgence of the garden phenomenon or “back-to-the-land movement began again in the late 1960’s when the need to work mother earth trended.  Land on the Mt. Penn Mountain was the perfect place for people to start what then was called a Free Garden.  There was a nice sunny, but marshy plot on Hill Road which was then maintained by the City of Reading in a section of the Clinton F. Earl Land Trust Preserve where they encouraged residents to start to plant.

These same ideals resonate today in 2020, as we are witness to a shutdown of the world making even stepping outside or a trip to the grocery store causes anxiety.  Many people are fraught with fear of exposure to the Corona Virus.  At this time in our history, we must adapt and remember the past generations and how they learned to cope and what they accomplished during the hard times. We also saw them rise above and unite establishing the perfect role model. Today people should again be prepared for a possible disruption in the food supply and demand.

Luckily, for us in this generation, we have use of a Google search. We can watch do-it-yourself videos, digital online libraries of books, or You Tube for the experienced or unexperienced gardeners searching for the answers. I hope you are inspired to create your own “Corona Victory Garden”.  Please join the Berks History Center and its partners including: the City of Reading, DS Smith, Reading’s Environmental Advisory Council, Berks Nature, the Berks Conservation District, Penn State Cooperative Extension and the Berks County Master Gardeners, the Reading Public Library, Muhlenberg Greene Architects and Reading Hospital in this county-wide victory gardening initiative to encourage all citizens to cultivate your own food system to secure your own future and stand with “History for Victory”.

Authored by Vice President of the BHC Board of Trustees, Corrie Crupi-Zana

Victory gardens were widely promoted during 1943 through 1945, during which time victory gardens gave rise to around 40% of all produce consumed nationwide. This large percentage of crops resulted from an estimated 20 million victory gardens cultivated across the American nation in 1944 –a staggering number when compared with the 5 million gardens cared for in 1918 during the First World War

These photos from the Library of Congress depict variety of Victory Gardeners around the country, including Vice President, Henry A. Wallace in his Victory Garden!

Join the movement. Plant your own #BerksVictoryGarden and share your stories with other local gardeners the Berks Victory Gardeners facebook group.

Victory Gardens were designed to maximize food production and meet the dietary needs of small families in wartime. During WWII, amateur gardeners were provided instruction pamphlets issued by the US Department of Agriculture on how, when and where to sow, and were offered suggestions as to the best crops to plant, along with tips on preventing disease and insect infestations. These comprehensive manuals were effective guidelines and resulted in an estimated 20 million victory gardens cultivated across the nation in 1944. From 1942 to 1945, war gardening gave rise to around 40% of all produce consumed nationwide.

Due to the wet conditions today, the BHC staff will be getting their hands dirty tomorrow (May 2, 2020), installing our very first Victory Garden on the lawn of the BHC museum. The BHC demonstration garden will be designed to emulate the layout of these historic victory gardens, planting as efficiently as we can in the small sun exposed spaces we have available.

Discover more about the layout of victory gardens and what to plant in this “ABC of Victory Gardens Pamphlet” from the Ohio History Connection‘s digital collection.

In Berks County, the Chamber of Commerce enforced the proposals of the National War Garden Commission during WWI. Community members could set up appointments with Mrs. C. G. Yoder to learn the basics of the gardening trade. She was available to teach the community techniques on planting, fertilizing, and what crops would grow best in their personal gardens.

The City of Reading offered residents several areas around town to start war gardens. Open city blocks, public parks with reservoirs or open land on private property were all made available to Reading residents for rent or free of charge. Gardens sprung up all over Reading, from the Hampden and Buttonwood reservoir plots, to the grounds near Sternbergh’s Stirling and Spring and Weiser Streets. 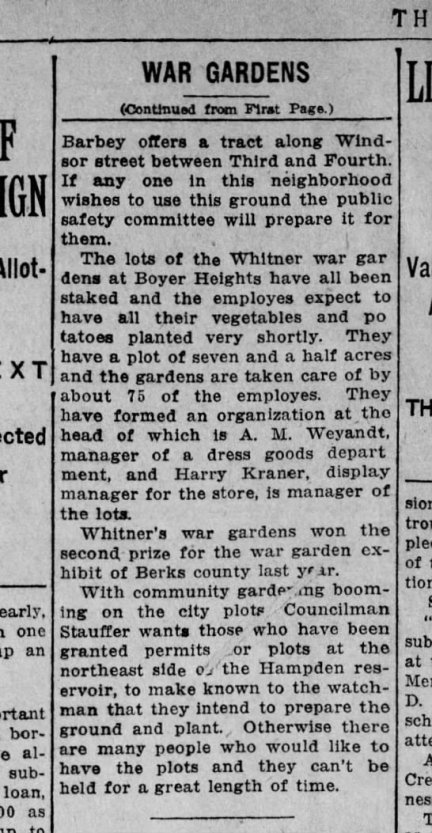 This April 22, 1918 article from the Reading Times tells citizens where space was available for Victory Gardening. Where will you be victory gardening this year? Whether its a small plot of land or a few containers, you can do your part to promote food security in Berks County.

In a “Letter from Uncle Sam,” this March 11, 1918 announcement in the Reading Times explains how Victory Gardens help to conserve both food and transportation. The ad encourages citizens to “plant the little that he has” as a patriotic service.

In addition to newspapers, posters were an effective means of communication during WWI, informing and encouraging the public to participate in the war effort. The virtues of victory gardens, also referred to as “food gardens for defense” are extolled on this WWI poster from the Library of Congress collection.

Will you be “a soldier of the soil” this year? The benefits of victory gardening are still as relevant today as they were during the Great War. Join our movement of Berks Victory Gardeners by planting a victory garden and helping to improve food security in Berks County!

The main objective of the National Emergency Food Garden Commission was to supply thousands of newspapers with articles and hundreds of clubs with promotional materials to inspire the planting of food gardens, as well as daily practical advice on how to build gardens and cultivate vegetables. As a result of this effort, an average of ten million people were given access to daily instructions as to how to grow their own emergency food supply.

Through the commission, the 1917 “Food Garden Primer” was distributed widely around the country. The 8-page pamphlet provides practical information for beginning gardeners.

This pamphlet was originally printed by Mayor Mitchel’s Food Supply Committee of New York City. The Albany Branch of the New York State Woman Suffrage Party pasted their own label on this pamphlet instead of creating one of their own, as a public service toward the war effort.

Click here to read the pamphlet in its entirety.

Suffrage gardens were a popular technique to gather support for woman’s suffrage in 1917.

The idea of the American “Victory Garden” was pioneered by forestry expert and third-generation businessman, Charles Lathrop Pack, a multi-millionaire and one of the five wealthiest men in America.

As the United States entered the first World War in 1917, Pack organized the US National War Garden Commission and launched the war garden campaign. His pamphlet, “Victory Gardens Feed the Hungry: The Needs of Peace Demand the Increased Production of Food in America’s Victory Gardens” is one of the leading monographs in the campaign for the Victory Garden program.

You can view and read the entire document here.

In addition to advocating for US war gardens, Pack talks about the unfortunate conditions in some European countries due to the ongoing war and the need for Americans to come to their aid by providing seeds for food products and trees. After the war, he documented the victory garden movement in The War Garden Victorious.