The Whittler of Shoemakersville  June 3, 1942

“Whittle while you work” might well have been the boyhood slogan of David A. Strausser, of Shoemakersville, whose magic penknife carves many curious objects out of wooden blocks. Forty-five years ago Strausser was a lad of ten, living on his father’s farm, near Shoemakersville. Tending cows was tedious business for the nimble-fingered boy who, even then, began to ply his knife against wooden blocks and through his skill and patience fashioned forms of familiar objects.

Each year the Berks Fersammling features an exhibit of some art or handicraft that is Berks County’s own product. This year David Strausser’s wood carvings were on hand to amaze and mystify the public. Today, at the mature age of 55 Strausser still whittles during the hours that can be spared from his employment as a machinist in a textile plant, converting bed posts into wooden chains and coaxing forms within larger wooden balls all spheroids a part of the original piece of wood.

Among other oddities Strausser has carved tiny chains from toothpicks and miniatures of farm machinery from wooden matchsticks. Free – link chains are his specialty. Not content with merely creating chains of pine timber, the carver has cut chains into chains. Marvel of marvels, these chains are longer than the original blocks from which they were cut; it is as if the artist had coused the wood to stretch. All of his products are flexible, many of them containing many moving parts. Such work requires painstaking effort and infinite patience. But to Strausser it is a hobby, and he loves it. He does not sell his treasures, for then the work would cease to be play.

One of the unique objects he has produced is an over-all series of rings or chains, somewhat resembling a mat, containing 279 links or rings, all cut from a solid board of maple. Othere curios to puzzle the notive are such things as balls in bottles whose nexks are too narrow to permit egress, anchors of ships, cotter pins that spread, made out of wood.

Strausser refuses to commercialize his hobby, but this does not mean that he is a recluse, keeping his treasures for his own sight along. He has staged many exhibits in Berks and nearby counties, notable at the Hobby Show and Fersammling. 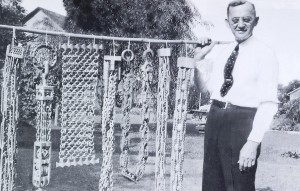 Archival Notes: David Adam Strausser gained national fame during his life due to his creations. He was the subject of numerous newspaper articles, as well as magazines, notably Popular Mechanics of January 1947. David Strausser died with no children and his entire collection was donated to the Hershey Museum. His collection is currently not on display at the Hershey Museum, but is available to researchers by contacting the Special Collections curator. His work truly is amazing and would be well worth the time to examine in person.

For more information on David A. Strausser the Whittler of Shoemakersville you can consult:

There are also several Reading Eagle Articles such as